The whole range of Blink backpacks was inspired by the Parkour philosophy,  a way of living that has the ability to overcome any obstacle (both physical and mental) and to become useful to any difficult situation. Practitioners of Parkour, try to view all obstacles and problems in their lives as new opportunities for growth and ways to challenge themselves. This is how Blink was born. There is a whole range of designs that was created by our need to have this positive feeling, the feeling that each and everyone has the inside strength to overcome any challenge.

“…Being able to overcome all obstacles, pushing the limits of what you thought you can do, this is what Parkour means for me. I ‘d never think I could actually run UP a wall. Sometimes emotion can be an obstacle, stopping us from moving on and living our lives to the fullest”, A.R. said.

Our mission is to spread the filling of useful strength and self-improvement and to inspire teens and young adults to be positive and live their lives to the fullest.

The essence of Parkour can be stated simply: it is the art of overcoming obstacles as swiftly and efficiently as possible using only your body. The fundamentals include running, jumping, and climbing, and we build on these fundamentals to improve our ability to pass over, under, around and through obstacles with more complex movements. Parkour is a system of fitness training that improves strength, speed, agility, co-ordination, stamina, endurance, and precision. It offers a full-body workout at any level of experience, and improves your ability to move, to harness your confidence, to change how you see the world. Parkour practitioners are called traceurs.

NOTE: This is Parkour Visions’ history of Parkour as researched by members of our Board. Within the Parkour community there are different interpretations of the orgins of Parkour, the meaning of the Parkour philosophy, and the proper practice of Parkour. This account is our attempt at an objective recounting of Parkour’s journey from inception to present day.
Parkour as we know it today originated in France and was popularized by a traceur named David Belle. Arguably though, Parkour history goes back as far as that of human beings. Sebastien Foucan, one of the elite French traceurs, and recently featured in the movie Casino Royale, has stated that when our ancestors chased game or were chased by predators they were practicing Parkour. This emphasis on the utility of Parkour is a common theme amongst the French traceurs.

More recently Parkour can trace its roots to one George Hebert. A French soldier and philosopher of physical culture, he was inspired by the athletic qualities of natives he encountered while serving in the army in Africa. He developed a philosophy of physical culture from his observations called Le Methode Naturelle (“Natural Method”). Methode Naturelle was based on the idea that humans had ten essential movement capacities to walk, run, jump, climb, move on all fours, swim, balance, lift, throw, and engage in self-defense. One of the main methods Hebert proposed to train these capacities was obstacle courses. These courses, known as Parcours Du Combat, have become part of military training systems throughout the world. Part of Hebert’s philosophy was that physical training should strengthen one’s moral fabric. His motto was “Être fort pour être utile,” (“be strong to be useful”). As any traceur can tell you, this is an important foundation of the Parkour philosophy.

One follower of Hebert’s Natural Method was Raymond Belle, a French national born in Vietnam in 1939. Belle lost his father during the Vietnamese uprising against the French and was taken in as a teenager by the French army. He was trained as a soldier and seems to have been part of a group of people who adapted Hebert’s Natural Method to train for combat in the jungle. He later went on to become an athletic hero in the French army and a member of the elite French military fire fighters. 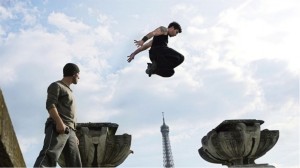 Raymond’s son David Belle would inherit the knowledge of movement that his father developed as well as the athletic talent. As a teenager David Belle and 8 others – William Belle and Chau Belle Dinh, Frederic and Yann Hnautra, Laurent Piemontesi, Charles Perriere and Malik Diouf – would take their childhood games and influences from their cultural history,Methode Naturelle, action films and video games, and turn them into a discipline of developing their physical and mental capacities through finding ways to overcome obstacles around them. Early on this whole group called themselves Yamakasi and called what they did either Parcours or L’art Du Deplacement. More recently they have gone their separate ways. David calls his art Parkour and stresses utility, while Foucan uses the term “Free Running” and stresses freedom of movement and finding your own way. Remaining members of the Yamakasi use the term “L’art Du Deplacement” and focus on the development of courage and strength through training. All are a part of the training that traceurs do and the first generation traceurs stress that it does not matter what you call it, only why you personally train the way you do.

As time passed the original traceurs inspired many others to join them, first in the small French suburbs of Lisses and Evry and then further afield in France. In 2002 David appeared in a British TV commerical called “Rush Hour” after which a UK scene initiatively consisting of just a few traceurs formed.

The London Parkour scene grew and in 2003 a documentary called Jump London was produced, followed by another called Jump Britain. Many local websites all around the world sprung up after that, and the sport has been growing ever since. 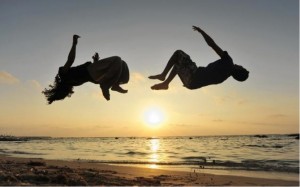 In the last few years, Parkour has become increasingly popular on the Internet as well as in movies like Casino Royale, Live Free or Die Hard, and David Belle’s District B13, as well as in many television advertisements. Local news coverage of Parkour in the Northwest has also increased significantly. The founders of the discipline have also begun to take a more active public role, including doing interviews with major publications, participating in large-scale public
demonstrations and setting up clinics. Some groups, including Parkour Visions, are working on organizing certified Parkourcoaching and guiding Parkour’s introduction to the mainstream. Parkour has also been used very successfully as part of physical educations programs in many UK schools and Parkour Visions is modeling those programs for use in the Northwest.

Any cookies that may not be particularly necessary for the website to function and is used specifically to collect user personal data via analytics, ads, other embedded contents are termed as non-necessary cookies. It is mandatory to procure user consent prior to running these cookies on your website.

By continuing to use the site, you agree to the use of cookies. more information